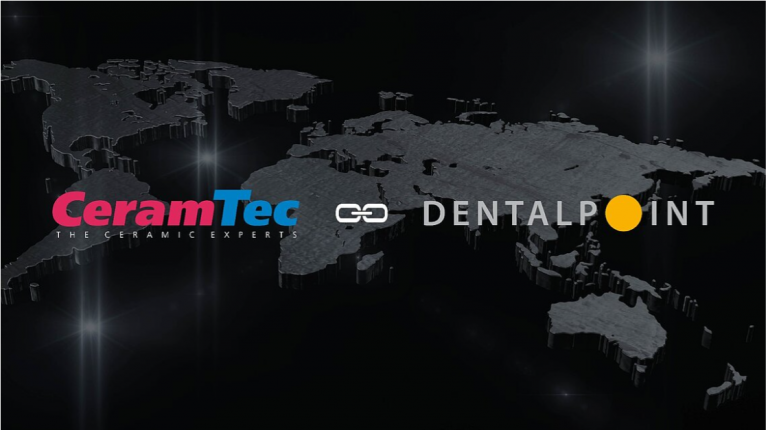 2021 has started with fresh corporate news & moves rocking the ceramic dental implant world. And this is good for a few reasons.

The swiss manufacturer Dentalpoint AG has, since 2009 developed and improved its ZERAMEX® ceramic implant system.  ZERAMEX® is one of the (few) alternatives for a full ceramic solution. It features a traditional ceramic material (ATZ) and a 2 piece screwed/threaded (not screw-retained) design. Abutment is threaded to the implant base, and crown is cemented to the abutment. The system is nevertheless enhanced in its base osseointegration performance thanks to an hydrophilic surface treatment, which is then sandblasted to achieve osteoblasts growing directly up to the implant.

Other characteristic feature of this evolving full ceramic system is the reinforced strength of the base-abutment connection, which is made of an intermediate carbon fiber threaded-interface. This improves to a certain extent the mechanical performance of the ATZ and eases the screwing of the abutment piece. Additional retentive elements in the form of a “Bolt-In-Tube” connection were added in the newest XT version.

The minimum diameter achieved for the ZERAMEX® family of implants is 3,5mm, something remarkable for a ceramic base, and although the two pieces make up for a monolitic form, abutments allow crown tilting of up to 15 degrees.

But Dentalpoint was not only producing exclusive “white label” for Nobel Biocare. Its business model called for the use of its own brand through distributors (globally) and through its own, growing salesforce. Also, direct sales to premium clinics and dentist in Switzerland, Austria, and… GERMANY.

CERAMTEC AND ITS MOVE

Meanwhile, in Germany, CERAMTEC Group, a technical ceramics champion with a strong protesic division that includes a dental implant line (rather secondary vs. their BIOLOX® which is mainly hip replacement oriented), was trying to promote its own two piece screwed ceramic implant system: DENSILOX®. Although quite similar to ZERAMEX®, it shows different features and a somehow simpler design. For instance, the system offers the choice in materials between ATZ, Y-TPZ and ZTA. However, minimum implant base diameters are in excess of 4mm.

Now, CERAMTEC just acquired Dentalpoint AG. This is a major development in the industry. See all details in the release by Ceramtec.

Both companies seem happy with the deal [Quote from the release]:

Of course, Ceramtec now controls a competitor that was most probably eroding its market share (in Germany and elsewhere).

“With this acquisition, we not only consistently expand our portfolio in the Medical segment, but at the same time we are expanding our access to the dental market, our product development expertise and our manufacturing capacities in a strongly growing market environment” says Dr. Hadi Saleh, CEO of the CeramTec Group.

And Dentalpoint cashes on their technology and technical development, and on their multi-channel successful growth strategy, while seeing their brand and company survive -at least in the short term- the acquisition.

Adrian Hunn, CEO of Dentalpoint AG, adds: “Through the integration into the CeramTec Group, we expect new impulses for our existing business and the expansion of our international presence. At the same time, Dentalpoint will remain a stand-alone company with the established Zeramex brand and will continue to expand.”

It is indeed quite remarkable that Dentalpoint AG is keeping its corporate identity as a Swiss subsidiary of Ceramtec, and that ZERAMEX® will remain a dental implant line brand. It’s not clear what will happen with Ceramtec’s own DENSILOX® one.

But, there is more than meets the eye in this corporate move.

THIS WAS NOT THE (expected) PLAN

Nobel Biocare is a leading implant Swiss company, specialised in Titanium based systems. It was acquired back in 2014 by US Danaher Corp., and is now part of the ENVISTA Group (spun-off from Danaher Holding in 2019), which is the world’s second biggest dental implant manufacturer and supplier, and one of the seven big groups that cope more than 80% of the global dental implant market. All these groups center their business around the titanium implant systems, and have managed to keep the entrance of ceramic solutions at bay. None of the 7 Groups is based in the EU, although this is the world’s biggest dental implant market (more than 40% global share).

For quite sometime, Nobel pursued the idea that Ceramtec would become their supplier for a two-piece ceramic implant and other ceramic medical devices. However, Ceramtec refused and decided to try and enter the market with their own brand and product line (DENSILOX®), leaving aside the idea of resorting to a distributor/competitor such as Nobel.

Nobel found an alternative in Dentalpoint AG and in the development of exclusive “white line” distribution of their ZERAMEX® system. This was, as we have seen, part of Dentalpoint sales channel strategy.

In fact,  at the IDS (Internationale Dentalschau = International Dental Exhibition) in Köln in march 2019, the debut of Nobel’s new Ceramic Dental Implant (distributed, not indigenously produced) line was expected, but instead, it was Ceramtec that presented their own.

However, just a few months later, at the 1st European Congress for Ceramic Implant Dentistry organised by ESCI in Zurich beginning of october 2019, before over 170 participants from 23 countries, Nobel presented ZERAMEX® as their choice for DISTRIBUTION of an all-Ceramic 2 piece Implant. Probably Ceramtec reflected on that, since this considerably endorsed and reinforced its ceramic rival Dentalpoint, and was theoretically detrimental to Ceramtec’s line DENSILOX®.

At that moment (little more than a year ago), and to summarize: There was Ceramtec on their propietary DENSILOX®, Nobel Biocare with their exclusive distribution of ZERAMEX®, and Dentalpoint AG with direct sale and distribution under their brand of the same ZERAMEX®. Let’s remember that we’re talking about two very similar implant systems.

With its acquisition of Dentalpoint AG, Ceramtec clearly consolidates the all ceramic 2 piece threaded implant offer. But most importantly, it bets on consolidating and expanding of the development, manufacturing, branding and DIRECT SALES of the ceramic implant alternative vs. resorting to “white label” distribution through titanium big players. The latter would mean helping them completing their portfolio and improving their image by offering a ceramic alternative, in front of the increased public awareness about titanium associated problems in dental implantology.

Regardless of the continuity of the distribution agreement between Dentalpoint and Nobel, it now remains to be seen if shockwaves will trigger any reaction (in the form of corporate moves, integration, or acceleration in the development of their own ceramic solutions) from the big titanium players that dominate the market, or if, either alternatively or simultaneously further defensive or strengthening consolidation in the still small ceramic realm will be seen.

We’ll be watching and keep you updated, as we, at Nanoker, are finalising the CE/MDR marking of our own disruptive and much superior Monoblock patented nanocomposite material and unique design of they INPERIO system.